I watched the Pre-Fight Press Conference between Canelo Álvarez and Caleb Plant, and I’ve seen some of the early publicity photos.

My first “read”, is that while I do believe that Canelo is no taller than a stocky 5.7, I have a hard time believing that Plant is the full 6.1 that he is advertised as being, maybe an athletic 5.11, but doesn’t look much more than that.

Usually, in his “doctored” photos, meaning, what he selectively publishes on his social media networks, Caleb always looks very fit, lean, with muscular definition and separation, and while in the more recent photos he doesn’t look fat nor obese, he does look like he has a bloated or distended stomach and lower abdomen. More than fat(he still has a very nice shoulder to waist differential and V-taper), he seems like he’s carrying a lot of weight of big meals or liquids(maybe he drank a lot of diet 7Up and his blader is just full) that haven’t yet been digest or assimilated, his obliques are also look a bit bulky, like he’s living the high life, even though, the fight with Canelo is “already” on November 6th, less than 8 weeks out for a proper training camp.

Who would I like to see winning this fight? I’m not a major fan of either fighter, so I usually prefer for the more commercially viable fighter to win, as that is better for the sport to keep building the bigger star to a bigger and bigger media(and comercial) profile, and consequently, drawing more fans, more buy rates, bigger viewership, more merchandise sold, more social media buzz, more press coverage, it’s “trickle down economics” all round for everybody involved in the Boxing phenomena. So, I’d prefer it if Canelo wins and keeps garnering momentum which he will in turn share with his next opponents and make everyone involved richer.

Plus, I have to say I’m not much of a fan of Caleb as a person, he strikes me as uneducated “white trash“(or some new-age hippie. Yes, I’m “old” and cranky), or maybe everybody in Tennessee sounds like him, either way, I just don’t empathise with him. Plus, I feel he does not have the personality/charisma to profit off or properly take advantage of a potential win and go on to become as cash-cow kind of fighter in the industry, so for Canelo to lose to him, it would be a waste and bad for Boxing.

Caleb is a good athlete and he’s got some decent technique but he’s never been tested. He might even have outstanding ability, but against whom has he sharpened his skills? A way of seeing this, is that Canelo at 31 is still young enough, but so much more experienced than these Plants, Saunders and Callums, that it’s almost not fair to opponents to face a man who still has a young man’s body and a wise man’s brain, it’s similar to when opponents faced Floyd Mayweather when he was aged between 35 and 38, too experienced but athletically still sharp.

As far as Caleb being trained by Andre Ward, it’s just one more reason for me to go “against” him, as I’ve never liked Ward, he’s always rubbed me the wrong way and struck me as aloof, standoffish and maybe even borderline racist against Caucasian fighters(he is of mixed heritage), although he’s certainly in “white bread”s corner for this one.

Post-Scriptum: It’s been so long(20 plus years) that I’ve written in English, that the tips of my fingers are playing frustrating tricks on me at the keyboard. 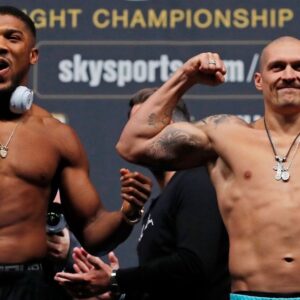